I played Life is Strange on a PlayStation 3. First of all, I should mention that I really think this is a TV-game. Play this on a big HD TV with good audio while sitting on something comfortable. Life is Strange is in its core a visual novel. You get to make decisions that will impact what happens in the game. On the surprising note; it also includes problem solving in the forms of detective work and extremely difficult moral choices. The main character in the game that you get to be is some random girl named Maxiene Claudfield, nicknamed Max. She is born 1995. One day in school she finds out that she can travel in time. She can do big time jumps by staring at photos she has taken with her polaroid camera. (After playing this game, I made sure to have one of those cameras myself, see image.). 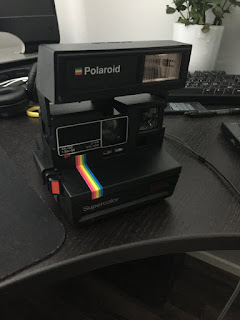 Her main superpower throughout the game is time travel. Most often however this only includes short jumps. Big leaps always result in strange events, spoiler warning I guess. Btw, never EVER read comments about this game on YouTube until you’ve finished it. The top comments for videos will reveal the ending of the game in one sentence. I finished it of course before reading comments about it, but beware.

Seemingly, this game looks like it is nothing special. Judging the game by its cover that is. I would perhaps never have played this game, let alone pay for it, if someone I know hadn’t gotten it. Normally I don’t play visual novels either. Sometimes I wonder how this person has the ability to find so many good games. Most likely your intuition has already told you that I think this game is good by now. It’s tricky to review a visual novel without spoiling details that are vital to the story in the game. It’s so much easier to just say, it is good and you should play it. Did I mention the first episode is for free on Steam? No I didn’t, however this game is a TV-game please don’t play it on a computer monitor.

Not that I know what normal is, but Max seems like a very normal person. I think it’s best to describe her like that. 90% of everyone Max meets is all messed up and have lots of problems. Since Max is such a kind person (or is she? You decide.) she tries to help everyone using her superpowers. This results in her what to others seems suspicious in the game, getting deeply involved in dangerous dramas. Every now and then Max has to do a critical moral choice (you get to choose it), which inevitably results in something immediately happening. Something that in an obvious way shows potential hazardous consequences that may happen because of that choice she (you) just made. All these vital choices are binary, you get to choose either A or B. There is no C, D, E or F. Only A and B, both of which are bad. Your job is basically to choose the one you feel like or the one that is the most moral in your eyes. Or you may just choose whichever is the less worse. When a choice is made you see the outcome from it, but you may go back in time and see what happens if you choose the other choice. You can do this, travel back in time and change choice, how many times you want. But after you decide to go with a choice and continue the game, the choice can never be changed unless you replay the whole chapter. It makes sense to call it chapters now that it actually is a visual novel.

All in all: lots of drama, politics, humor, danger, darkness and impossible obscure moral choices equals me like. When the game was new, you could play the game even though it wasn’t finished. So you had to wait approximately 2 months between each episode, and there are like 5 of them. That gave me plenty of time to reflect over how the upcoming chapter would be and the choices I made, whether they were bad or not and how they would affect the “big picture” in the story. I was somewhat disappointed that the choices didn’t really have that big of an influence in the game all in all. Although there was some noticeable impact, I felt that it wasn’t quite enough. The game was still good though. Something I also noticed is that they are going to release a follow up for the game. Though, it is not actually a follow up. It is about what happened before the story in Life is Strange. I didn’t think any follow ups for this game would get my attention but by judging from the trailer for the follow up, my expectations are high.
Upplagd av xXrandom kl. 10:31