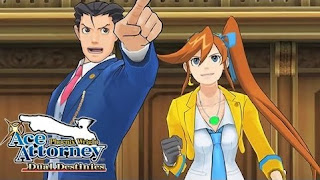 Ace Attorney: Dual Destinies is a visual novel developed by Capcom. As far as I understand most games in the series “Ace Attorney” are for the Nintendo DS game console. However this game is also available for phones, both Android as well as iOS. Gaming on a phone compared to a DS or 3DS is better in the sense that you have a HD screen (unless your phone is trash), as well as all the other conveniences that comes with using a phone. Portability being one of those conveniences, instead of carrying around both a phone and a DS you just need to carry a phone. So already this game gets a plus for being available for smartphones.

In Ace Attorney you follow up with certain characters who are attorneys in the same agency. These people are named Phoenix Wright (age 33), Apollo Justice (age 23-25) and Athena Cykes (age 18). Phoenix Wright also has a ‘daughter’ Trucy Wright (age 15-16). Athena Cykes is a ‘new’ character in this game has supposedly just recently finished her education as an attorney and earned her badge. Due to her young age, most people don’t believe at first sight that she’s an attorney.  As an attorney in the Wright agency, you get to defend clients in court. Defending in court is the main part of the game. Usually before you end up in court however you get to investigate a crime scene and interview various individuals before the court starts. This is very important in order to gather evidence (you can’t skip this anyway, but still very important nonetheless) and to get some idea(s) of how things looks like regarding the current case. When you are in court you get to listen to either the defendants or some witnesses’ testimonies. When that is done their testimony is split into pieces which you can press the person being cross-examined for further information. 90% of the time your job is to check what evidence you have available to you and present one such evidence to the part of a testimony that contradicts the given evidence. If you get it wrong you get a so-called penalty by the judge. Too many penalties and you lose the game. This isn’t really a problem because the game lets you just continue back from where you left if choose to do so.

What is different about this game is that you need to think and figure things out before you can make progress. You need to listen to what is being said and be able to work out what is correct and what is contradictory yourself. Often testimonies and evidence change or is added which means that you must rethink everything that you once thought were correct. This is a very common occurrence in this game unless your Einstein and can figure out what happened before the trial begins.

The game is well made, like many Japanese stuff. You get to watch anime clips every once and a while. Watching clips helps you to get a mental image of the story, and it is also entertaining. All attorneys have a special power. This power can be used to help you during tough times in court or when investigating. Phoenix can untangle mind locks, Apollo can sense twitches as a reaction to a lie or an uncertainty and Athena can hear emotions. In court, you get to use Athena’s power to find contradictions between a testimony and the emotions being felt. All in all I found this game fun to play and hopefully I also learned a thing or two about debating and objectivity. This game is worth the money. If your still hesitant getting the game moneywise, you can buy one episode at a time. The first episode is also the cheapest.

It’s kind of hard to talk about what happens in the game without spoiling the story. There is a red thread spinning across most episodes in the game which is good. It makes you want to investigate more and keep playing new episodes. What I can say is that the bonus episode is sort of weirdly both not connected to previous episodes as well as a little bit connected at the same time. I guess they wanted to keep some stuff as obvious without spoiling the story in the game. Or, the bonus episode just takes place in some sort of strange time period in between the normal episodes. I liked the bonus episode but the normal ones were a bit more exciting.
Upplagd av xXrandom kl. 11:58